can be put into action

How the Faith Community Supports our Work

Congregations and faith communities throughout our service area come together to combine their volunteer, fundraising, and prayer efforts to help realize our shared vision of a world where everyone has a decent place to live.

Communities of faith are an important part of the success of Habitat Newburgh. Our very first house was a Unity House sponsored by the collective efforts of local faith communities. To date Faith Build groups have sponsored 27 of the 80 homes that we have completed and 10 of the 30 A Brush with Kindness repair projects.

When Habitat Newburgh built its 22 home E. Parmenter Street Neighborhood Development, a flagship of our community-building work, one set of five connected houses were designated as the Faith Builds, with each home sponsored by a Faith Build partner.

Currently under construction we have Faith Builds II, another set of Habitat homes that will be supported by countless prayers, volunteer hours, fundraising events, and donations big and small from communities of faith. Four future homeowners will look forward to living in a decent and affordable home, surrounded by wall built with great love.

You and your faith group can be a part of this meaningful ministry of shelter. Contact our Fund Development Manager to find out how your faith community can get involved. 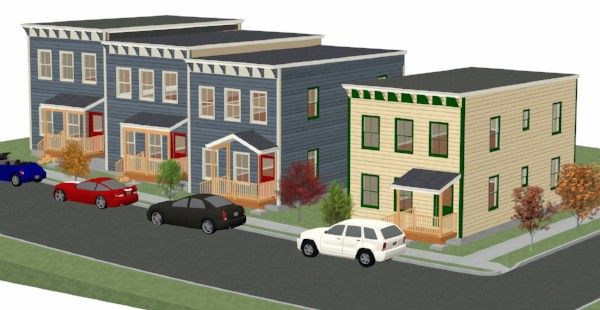 Eternal One, whom we call upon by various names, yet who is beyond our naming, we give thanks for the gift of life and of life together as your beloved community. Just and Compassionate One, we pray for all who need shelter from the storms of existence--from poverty, and prejudice, and indifference to human need and hope. Sheltering God, may we continue to be your co-workers, as we build houses and homes, lives and community, in this city, and as we tithe to provide assistance to families in Ethiopia, Haiti, India, Jordan, and Mexico.  AMEN