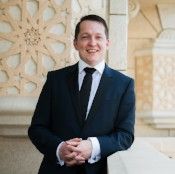 Newburgh, NY (October 11, 2018) — The Board of Directors of Habitat for Humanity of Greater Newburgh is pleased to announce the appointment of Matthew Arbolino as the new Executive Director. Arbolino, a native of Newburgh, has served as Habitat Newburgh’s Volunteer & Outreach Coordinator for the past 2½ years.

“The Board, staff, and volunteers of Habitat Newburgh are pleased and excited that Matthew has accepted this challenging position,” says Habitat Newburgh Board President Rev. Deke Spierling. “We are eager to work under his leadership as our affiliate moves forward into a strong future, building strength, stability, and self-reliance through shelter.”

A graduate of Newburgh Free Academy, Matthew has worked in business, finance, education, and sustainable development in a variety of places, including New England, California, New York City, and Vietnam. Matthew believes that the surest way for Newburgh to achieve prolonged success is to empower families and neighborhoods to have ownership of their community.

Matthew says, “This is a tremendous opportunity for anyone, let alone a native of Newburgh. Over the past 19 years, Habitat Newburgh has rejuvenated nearly 100 properties in the City of Newburgh. More than this, Habitat Newburgh has worked to help families in this community thrive through homeownership. I am thrilled to be in a position that allows me to work directly alongside the greater Newburgh community.”

About Habitat for Humanity of Greater Newburgh: Seeking to put God's love into action, Habitat for Humanity of Greater Newburgh brings together people to build homes, communities and hope. Founded in October of 1999, Habitat Newburgh is one of nearly 1,300 local affiliates of Habitat for Humanity International, is the largest and most productive affiliate in the Hudson Valley, and is the first affiliate in the northeast to be selected as an Affiliate of Distinction. We have completed 94 decent and affordable homes in one of the most distressed urban areas in the United States and the largest contiguous historical district in New York State. The E. Parmenter Street Neighborhood, a 22-house development on what was formerly one of the most blighted blocks in Newburgh, is now a thriving community of Habitat Newburgh homeowners. To date, 111 families earning between 30-60% of the area median income, have demonstrated a willingness to partner with Habitat Newburgh by investing sweat equity into the construction of our homes, participating in required homeowner education classes, and signing a mortgage. Habitat Newburgh homeowners contribute over $500,000 per year in school and city taxes. Thirty-five Newburgh homeowners have participated in our minor home repair program. In addition to our work in this community, Habitat Newburgh has helped 108 families in Haiti, Ethiopia, India, Jordan, and Mexico secure shelter.